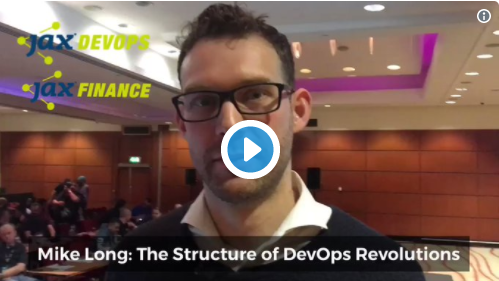 JAX DevOps 2018 speakers say "Hi!" and sum up their sessions in short videos on Twitter. Check them out to get a closer look at the insights shared during the event!

We are happy to have @danielbryantuk with us! Here’s a short intro to his morning talk earlier today. Great to see you again Daniel 👋 pic.twitter.com/2werVY67tx

Meet our speaker @tddmonkey techie by day, bassist in a punk band by night, groovy at all times. Great having you! pic.twitter.com/N4HImchMWC

Thank you @eoinwoodz for joining us! Here’s a short intro to today’s session: A Breathless Tour of Blockchain ⛓ pic.twitter.com/JLAWqthNeJ

Missed “Fully serverless: A case study”? Here’s the session in a nutshell with @jodastephen and Chris Kent! Thank you guys 👍🏼 pic.twitter.com/Wxp6DN3CSj

We were lucky to have Barbara Mellish presenting an inspiring keynote earlier today! We asked her to recap the main ideas 💡 Thank you Barbara @theSERatio pic.twitter.com/n7xDXG6aP2

Missed John Davies’ session earlier today? Here it is in a nutshell. Thank you @jtdavies! pic.twitter.com/IXLuLjka6H

Did you know that rhinos 🦏 are monoliths? @eijgermanspeter told us about his session earlier today. Thank you for joining! pic.twitter.com/TlQnaJeP5d